My dad is a big car junkie, and I remember as a kid he took me to some museum in Middle of Nowhere, Texas, that was basically some guy’s private classic car collection. As a result, I still love classic cars, the older the better. I hit the Petersen Automotive Museum in Los Angeles this past weekend and saw their Aerodynamics exhibition, in addition to all of the cars in their regular collection, and it got me thinking about the term “retro-future.”

When I put out the first Sci-Fi Romance album, I had a hard time explaining what the music sounded like, which seemed weird, because the instrumentation was acoustic guitar, bass, piano, and drums. Seems straightforward enough, but when reviews started coming in, I was happy to see I wasn’t alone in struggling to put the sound in a certain box. One of the terms that kept cropping up was “retro-future,” or that it had a “retro-future vibe.” I liked that.

Retro-future refers to the conflict between the future we imagined at some point in the past, and the future we actually got. There is a ton of awesomeness out there dealing with retro-futurism, and a couple of my personal favorites are Matt Novak’s (@paleofuture) Paleofuture Blog for the Smithsonian, and Daniel Wilson’s book Where’s My Jetpack: A Guide to the Amazing Science Fiction Future that Never Arrived. 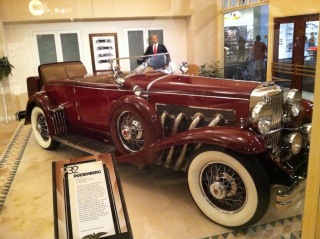 What struck me while walking around the Petersen looking at automotive dinosaurs was how “futuristic” they still look in many ways — from the totally steampunk exhaust tubes on the 1932 Duesenberg to the organic lines and disco volante hubcaps of the 1939 Lincoln Zephyr. We recognize that these things are old, sure, and recognize design elements that came, had their day, and went, but they still retain a sense of the futuristic. And I wondered why.

I think, ultimately, it has to do with order. Philip K. Dick, cyberpunk, and other dystopian sci-fi works paint us a picture of the future we’re likely to actually see, rife with overcrowding, drug addiction, a loss of personal space and identity, and wall-to-wall advertising. But those are projections of current day problems, and the imagined outcomes of them if left to fester.

I think in our least cynical moments, though, what we all really hope for from the future are solutions to those problems. We hope in the future we will have found a way to forge order out of our present chaos, despite all evidence to the contrary, and that life will be Interesting. These cars, despite their age, are all rigorously ordered, and definitely Interesting. In a sense, they still represent an unattained ideal.

I mean, really. Who among you, while assembling your Victorian cosplay outfits, hasn’t wished that someday you might be able to drive a car with exhaust tubes snaking out of the engine compartment to Comic-Con? 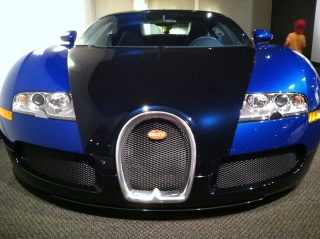 And check out the similarities between the grilles and roof lines on the 1939 Lincoln and the 2009 Bugatti Veyron (which is the most expensive production car in the world, and the fastest production car ever built). Even separated by 70 years, the future of the past still seems to give us something to reach for.